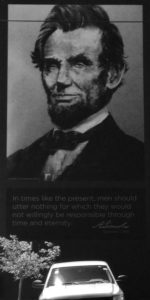 I’ve recently returned with my teenage-son from a two-week road trip. (His dad’s currently traveling in China.) We drove from South Dakota to see my parents in North Carolina, with many stops along the way. Among them was Springfield, Illinois, adopted home of President Abraham Lincoln, where Nathan and I took time to explore the Lincolns’ life prior to their departure for the White House.

Many of Abraham’s Lincoln’s words had a sharper ring in my ears than usual, given today’s political climate. His observation in the photograph below—part of a mural on a building adjacent to a parking lot—was just one quote that struck me. Nathan and I chanced upon the mural while walking a Springfield street. You might call it a call to mindful speech. To careful utterance. To discipline of the tongue.

You might even regard it as a caution against “modern-day presidential” tweet storms (quoting the present occupant of the Oval Office).

It isn’t Mr. Trump alone who I wish would heed Lincoln’s counsel to be more mindful in his speaking. It’s many of us—I include myself—on the other side of the political aisle, who too often express less than “the better angels of our nature.” (Lincoln’s words again, from the end of his first inaugural speech, just prior to the outbreak of civil war.) How do we resist those who do harm without ourselves acting hateful and injurious? How do we speak out against cruelty, ignorance, injustice and oppression without violating the humanity of our opponents, or surrendering our own honor?

“Honor.” A lost word? Perhaps we should reclaim it. Re-imagine it. Re-assert it.

“We are not enemies, but friends,” Lincoln declared, in that same inaugural address, seeing the monstrosity of war on the horizon. Perhaps he was even begging his fellow citizens, in his high-pitched, nasal Kentucky drawl. “We must not,” he urged, “be enemies.”

Mr. Lincoln had his flaws. So do we. But as he reminded us, we also have wings. Let’s not give up trying to fly.