Here’s Your Chance to Win My New Book in Giveaway

By Phyllis Cole-DaiAugust 6, 2018No Comments 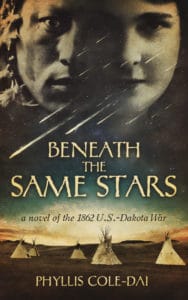 One Sky Press will officially release my historical novel Beneath the Same Stars on August 20th. But today we begin the celebration of its launch with a GoodReads giveaway! Click here for your chance to win one of 100 free copies of the e-book edition.

This GoodReads giveaway will end on August 16th. But don’t delay. Enter now!

Need a refresher on what the book’s about? Read on….

August 18, 1862. On the Sioux reservation in southwestern Minnesota, Indians desperate for food and freedom rise up against whites in the region. Sarah Wakefield, the wife of a physician, is taken captive with her two babies. Their fate falls into the hands of the warrior Ćaske. As war rages, little does she know how entwined their lives will become.

Beneath the Same Stars is the gripping story of two people, caught between worlds, who are willing to do almost anything to defend those they care about—including each other. But the drama is bigger than themselves. Tragic forces have been set in motion.…

Click here to watch the book trailer and to read advance praise for the novel.

Get your free sampler of my work by joining my Open Circle. (Music, prose and poetry, oh my!) As a member you’ll receive an occasional email with happy updates, exclusive content and special offers. You may unsubscribe at any time, but I hope we’ll stay in touch!

Beneath the Same StarsU.S.-Dakota War of 1862

Poetry of Presence Deep Discounted in Response to Pandemic