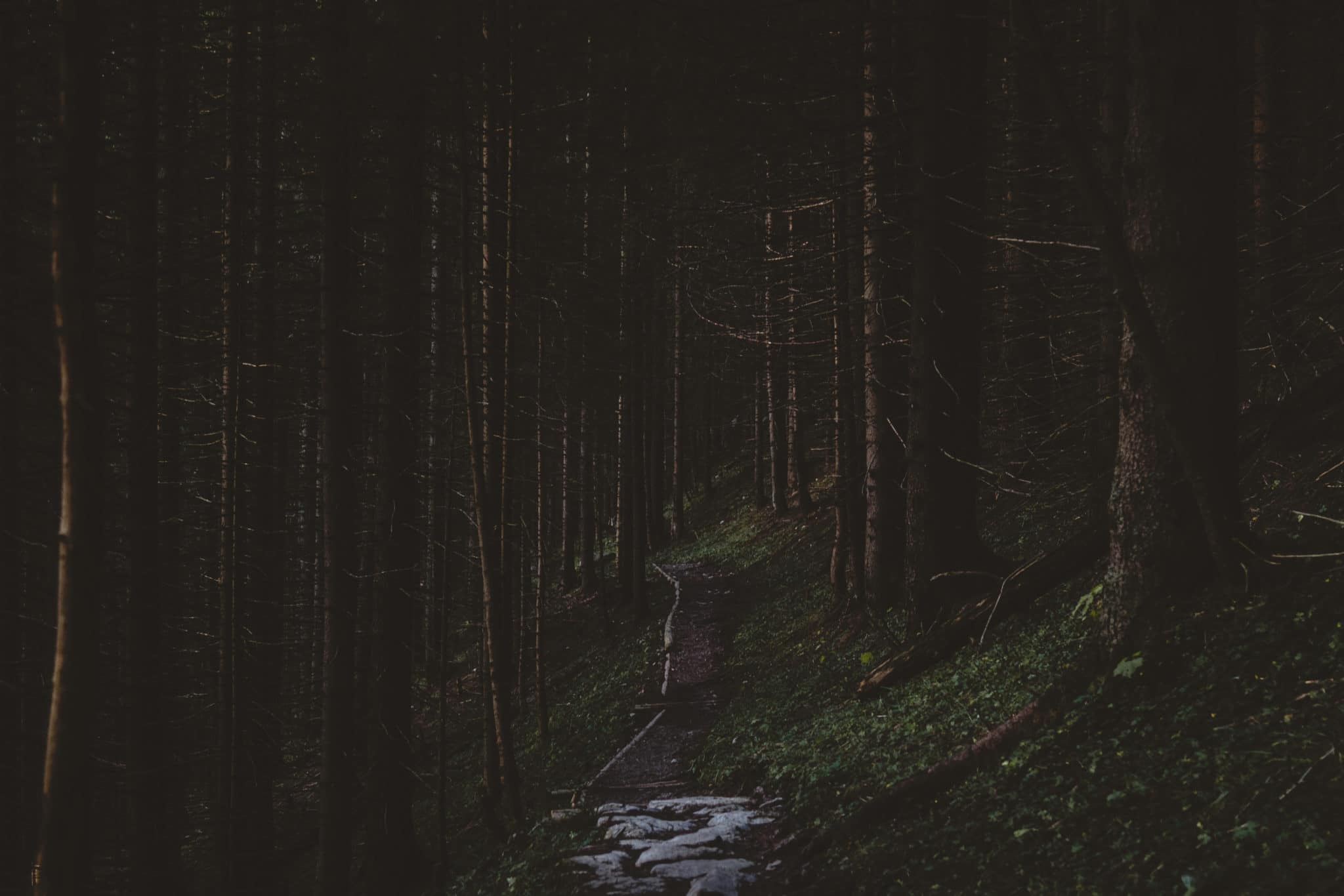 Laughing in the Dark

Last week I joined my friend and fellow writer Ruby Wilson on a personal retreat in a local state park. Camping in adjoining sites, we socially distanced across a shared fire. We worked on our separate writing projects. We read books. We discussed current events and family matters. We told stories of the supernatural, and bad jokes. We mourned the loss of Ruth Bader Ginsburg. We sat in stunned silence, hearing that the husband of a mutual friend had died in an accident. Sometimes even retreating to the woods can’t protect you from the harsh realities of life.

Our second night in camp, we got a little crazy. We decided to hike the Tetonkaha Trail in the dark. Without flashlights. Without even a sliver of moon to see by.

In daylight the Tetonkaha Trail is a peaceful stroll, especially in cooler weather, when the lake empties of boats and jet skis. You don’t meet many other hikers. Only three-quarters of a mile long, the rolling path loops around a peninsula jutting out into a shallow lake. Most of the way, you’re sheltered by warty hackberry trees, gigantic oaks and cottonwoods, box elders and ashes and ponderosa pines, clusters of willows. Songbirds accompany you, lest you intrude on their banquet of berries. Nearing the point, you break out of the woods into a spacious meadow of waist-high prairie grasses. From there you can see herons striding the shorelines and crowds of migrating white pelicans riding the water, along with noisy gulls and ducks.

Like I said, a peaceful stroll in daylight. After sundown? Ruby and I could only guess. We zipped on our coats, grabbed our trekking poles, and abandoned the comfort of our slow campfire. We set off on a short walk to the trailhead, amazed at the stars, still brilliant despite the smoke blowing through from western wildfires.

Ruby had hiked the Tetonkaha Trail only once before, but being a brave, hearty soul, she volunteered to lead. I shadowed her up the gentle hill from the trailhead into the woods, where the world contracted to shades of black, with flecks and patches of deep gray. There her silhouette melted away. I could only follow the sound of her voice and the popping of acorns beneath her feet.

My eyes believed that they could conquer the night by sheer determination. They tried squinting. They tried opening wide. They tried peering over the rims of my bifocals. Nothing helped them adjust. I might as well have been staring into the unrelenting dark of a cave. I couldn’t see any light at the end of the tunnel of trees. Just blacker black.

Autumn leaves dripped down on my head and shoulders, startling me. I relied on my poles for balance. “Go up,” they told my feet. “Go down.” They warned of protruding roots and rocks. They let me know when I was straying into underbrush. When I swept against weeds on the edge of the trail, I eased back toward the imagined center, pushing aside my worries about poison ivy and stinging nettles.

In the interval of the meadow, I could vaguely discern Ruby, six or seven feet ahead. Anchored by the sight of something I recognized, my body relaxed into the sighing of grasses, the chirping of crickets, the beating of waves against the beach. When we reentered the trees, I laughed.

Truth be told, I’ve rarely laughed so much as I did that night, wending around that loop trail. It was the same for Ruby. At first, our laughter might have been thanks to nerves—though what’s the worst that could have happened? We couldn’t have fallen off a cliff or been gobbled up by a bear. We couldn’t even have gotten lost, not on a loop trail with flashlights in our pockets (just in case).

Most of our laughter, though, arose from pure wonderment—at how magical the world appeared in its varied shades of black; at how, without light, our eyes surrendered to the guidance of other senses; at how phenomenally those senses teamed up to navigate a safe way through; at how profound ignorance of what was coming next forced us to pay close attention to every step we took. We scarcely stumbled, and we made good time. We hiked around the peninsula at almost the same pace as we did in broad daylight.

“I’d never have done this on my own,” Ruby and I said to each other, more than once.

We were so enthralled by that hike, we did it again the very next night. This time, I led, and Ruby followed. Reversing roles changed our experiences of the trail. And still we laughed.

In the woods of these strange and troubled times, let’s just keep putting one foot in front of the other, trusting the wisdom of all our senses and rejoicing in one another’s company. If we do, we won’t need to whistle in the dark, trying to sound braver than we feel. We’ll be laughing for dear life down the path.