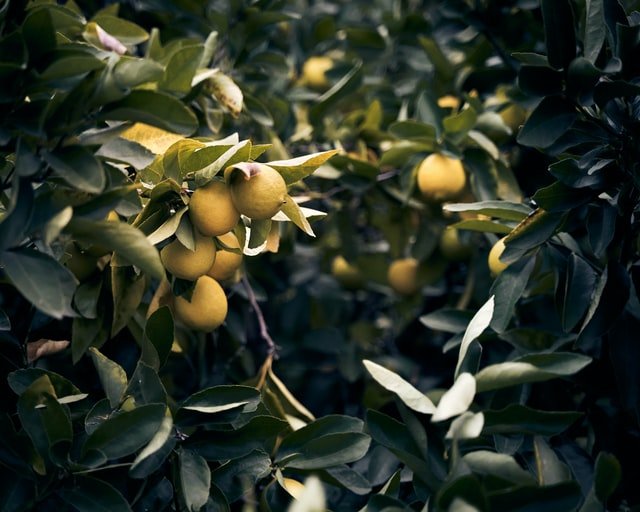 By Phyllis Cole-DaiFebruary 21, 2022No Comments

Lemon tree, very pretty, and the lemon flower is sweet

But the fruit of the poor lemon is impossible to eat …

Do you remember this folk song about disappointed love? So much hinges on that one word “But!”

During my recent writing retreat in (sunny! warm! green!) California, this song was constantly running through my mind. Let me explain why. (Spoiler: It has nothing to do with romance.)

Before flying to San Diego, I’d placed an online grocery order for delivery to the AirBnB casita I’d rented. That order included a bag of tangerines.

When I arrived at the casita, I had to laugh at my purchase of fruit, because outside the fence surrounding my “little house” stood a belt of citrus trees: tangerine, orange, grapefruit, lime, and lemon. Every branch was loaded.

Over the next 10 days, I worked on my novel-in-progress beneath this lemon-lime tree that shaded my private patio. The tree was dropping ripe fruit as if blessing my efforts. I never knew when or where the next piece was going to fall. Occasionally I got bonked on the head.

My host Bob, an Italian-American in his seventies who had once played linebacker in the NFL, urged me to pick and eat as much fruit as possible. “It’ll just go to waste,” he said. “I tell my neighbors to come help themselves, but most of it rots.”

The first day of my retreat, three lemons were lying under the tree on my patio, so I made a big pitcher of lemon water.

On the second day, there were seven or eight lemons scattered on the ground.

By the third day, a dozen. (You see where this is going.)

By the last day, I quit counting at forty. And that’s just the fruit dropped by one tree.

All that fruit going to waste really bothered me. I fantasized about setting up a road-side fruit stand. Of going door-to-door in the neighborhood, vending fruit and donating the money to a worthy cause. Of delivering fruit to a soup kitchen. Of abandoning crates of fruit where they might be rescued by somebody who’d make good use of them all.

But the fruit wasn’t mine to distribute. It was Bob’s. And, for whatever reason, he couldn’t deal with it.

“I hurt,” he told me, as we stood yacking about his citrus trees, “every day.” I suspected he wasn’t talking only about the pain in his body, broken by football.

“What inspired your love of growing things?” I asked.

“Oh, I don’t love it!” he said, then proceeded to tell me about the chili, fig, and avocado trees tucked away in his back yard.

He kept talking, and I kept listening, until finally he said, “I like growing things. I really do.”

I swallowed a grin. Maybe “love” had been too strong a word. He had to water it down to “like.”

So, here was a fellow who very much liked to grow things—especially on trees—and who appeared to be quite good at it. (“Very pretty.”) But he left the ripe fruits of his labor to rot on the ground. (“Impossible to eat.”)

Frankly, this phenomenon isn’t unusual among us creative types. We’re often more into process than into product. We lose ourselves in the nurturing, the designing, the making, the shaping, the doing … whatever we call the “bringing into being” of something that didn’t exist before.

But when we focus too much on the process, we fail to properly value the fruit of our labor. Then we end up squandering it. We let it spoil on the ground. We stuff it into a closet and forget about it. We dismiss it, or minimize it. We shy away from sharing it. We might even become afraid to share it. After all, what if we set up a fruit stand by the roadside and nobody stops? What if we offer tangerines to our neighbors, only to be rejected? What if … what if … what if?

I think it’s time we rewrite the song lyrics. Eliminate the “buts.” Bring forward our “very pretty” creative selves without apology. Celebrate not just what we’re doing but what we’ve done.

Bob didn’t want his fruit to rot. He just needed help to get it into the right hands. Everybody who loves to create anything, casually or professionally, needs that sort of help.

And we can give that sort of help to one another. We can pay more attention to the creative fruit hanging on the branches of our lives; give thanks for it; encourage the sharing of it. We can even engage in trade.

I’ve got lots of words hanging on my trees. What you got?

Photo by Gilberto Olimpio on Unsplash