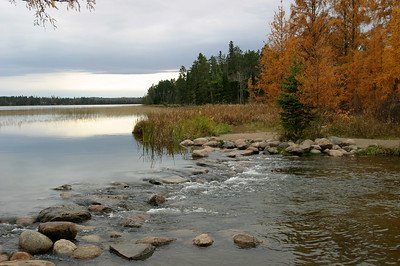 Parable of the Stream, in Five Parts

The woman wades into the shallow stream. The frigid October water nips the skin of her legs. The gravelly bottom bites the soles of her bare feet.

It’s too late in the season for this, part of her says.

Within a short distance, her flesh makes peace with the chill of the water. The gravel streambed becomes a mixture of silt and sand, a soft cushion to walk upon.

Here, the water is up to the woman’s thighs.

Stream, she says, if there’s something you want me to know or have, please show me.

In time, a dark, stubby stick appears in her path, resting on the sandy bottom.

Curious, the woman reaches into the water to fish out the piece of wood. Half-buried, it turns out to be long and stout—a perfect walking stick to support her as she strolls among the minnows.

Thank you, she says to the stream.

Water winks and smiles in the sunshine.

The stream leads the woman to the lake of its birth. There, at the entrance, water trips over a rock dam so narrow and rugged, only one person may traverse it at a time.

A gray-haired woman, slight and stooped, is trying to pass over. A third of the way across, she stops, afraid she can’t safely step from where she is to where she must go.

Dawdling nearby in the stream is a middle-aged man, pant legs rolled above his knees. “Hold out your hand,” he says to the woman, sploshing toward her. “I’ll keep you from falling.”

The gray-haired woman stretches out her hand in trust. The stranger takes it lightly, like a dance partner.

She takes the big, necessary step. He releases her hand. They both laugh, like birdsong.

In the flowing stream, the woman leans on her stick, and laughs with them.

Halfway across the rock dam, the gray-haired woman meets a white-haired man coming from the other side. They stare at each other, unmoving. Neither can go forward. Neither wants to go back.

“Is this a standoff?” the gray-haired woman says.

Silent minutes pass. In the stream, the woman with the walking stick watches.

All at once, as if on cue, the gray-haired woman and the white-haired man reach out to each other and clasp hands. In one graceful motion, they brush past each other, no margin for error. Together, their uncertain feet are nimble on the tightrope of rocks.

Letting go, they carry on their separate ways.

Two young women on the bank discuss whether or not to wade into the cold headwaters.

Oh yes, you must, the woman leaning on her stick wants to say from the stream.

Here, take my stick to steady yourself, she wants to say, though she knows, at their age, they won’t need it.

I want you to have what the river has given me, she wants to say, taking a step toward the bank where they stand, to offer them the stick—

That’s when she teeters. Loses her balance. Topples backward. Not into the water, but onto the rocky teeth of its edge.

She lands full-force, her bony spine against the jagged spine of the earth. Her neck and shoulders bounce. A stone fist punches the flesh of her right side, between her back ribs and the crest of her pelvis.

Blinded by pain, she hears herself moan, loud and long.

How can I be making such a sound? she wonders, her lungs flat, even as her groan rakes the air.

At last the moan stops. Once it stops, she can see again.

They’re all huddled around her: the two young women, the white-haired man, the gray-haired woman, the middle-aged stranger with his pant legs rolled up.

The kindness she earlier watched them show one another, they’re now showing her. They’re drawing deep breaths with her. They’re inquiring after her head, her neck, her spine, her legs. They’re helping her sit up. Find her feet. Transfer onto the bank, where she begins to recollect her wits and her strength.

“Stream,” she’d said, at the start, “if there’s something you want me to know, show me.”

And so it is: That to which she gave her full attention has returned to her as gift.

I based this piece on my return last weekend to the headwaters of the Mississippi River at Lake Itasca, Minnesota. You might recall my first visit there during the summer of 2020.