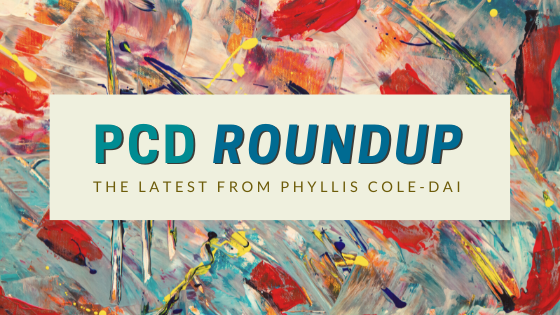 PCD Round Up (May)

By Phyllis Cole-DaiJune 2, 2022No Comments

A brief roundup for May, as I’m currently out of studio, traveling with Jihong and Nathan. We’re on a whirlwind roadtrip to North Carolina, Virginia, and Washington, DC. Once we get back to South Dakota, we’ll move Nathan back to his college in Minnesota, where he’ll do a summer fellowship in a science lab.

► WHEW! Time to get out of town! On May 12, my town of Brookings and much of eastern South Dakota was hit by straight-line winds of 90 MPH (gusting to 100). The derecho caused major damage, especially by uprooting trees. As of this writing (May 14), few serious injuries have been reported in our immediate area, but lives were lost elsewhere in the 28 affected counties. I’ve never experienced such a storm. The world turned midnight black in the space of two minutes. Here are a couple photos of the haboob (dust storm) that the derecho pushed through ahead of the rain.

► WHEW! I almost never had the change to meet, let alone marry, my husband Jihong. During our trip we’ll celebrate the 40th anniversary of his arrival in the U.S. from his native China. He’s reuniting with the two classmates who came over with him in 1982 for graduate studies at the University of Maryland. They were among the first students China allowed out of the country following the Cultural Revolution. Jihong and I met years later, when he was a post-doctoral researcher at The Ohio State University.

► NEW! A draft of my novel-in-progress, The Singing Stick, is now in the hands of my editor. Nothing’s certain, but like Poetry of Presence Volume 2, this book will probably be released in 2022. Stay tuned for fun details over the coming months!

► NEW! A second volume of Staying Power: Musings & Poems is also in the works.

That’s all for now. Stay well. Stay witty. Stay tuned into your true spot and create from your radiant, beautiful self.