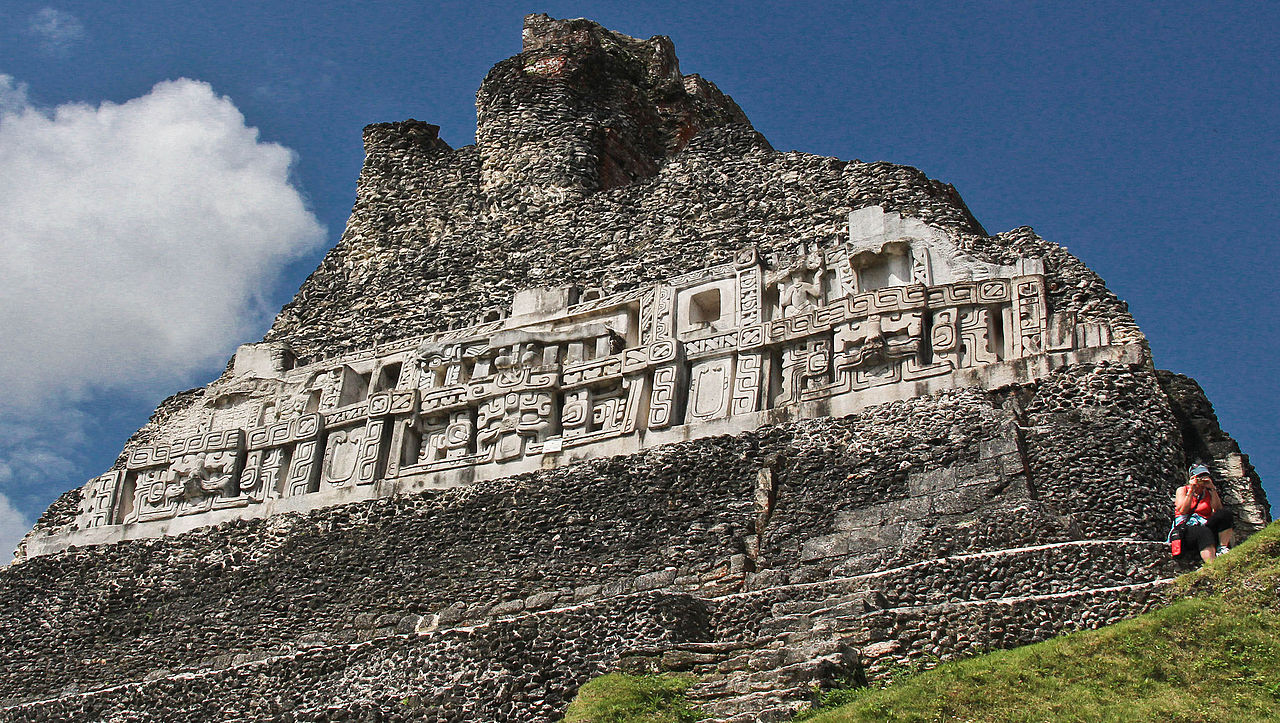 “View from the Top of the Temple”

When I was a sophomore at Goshen College, I traveled to Belize for a Study-Service Trimester (SST). This was back in 1982, just a year after Belize had been granted independence by the United Kingdom. About the size of Massachusetts, the country shares borders with Mexico and Guatemala. It’s a beautiful place. Perhaps you’ve had the good fortune to visit.

Except for family excursions into Canada, my trimester in Belize was my first time outside the United States. I returned home with a suitcase stuffed full of questions about what it meant to be American, Caucasian, female, middle class, capitalist, and Christian. Two of the people who helped load up my bag were Roy and Ethel Umble, the leaders of our SST unit.

About three weeks into the term, Roy and Ethel took our group to the ancient Mayan ruins of Xunantunich. Located in the jungle less than a mile from Guatemala, the site dates back to the first millennium B.C.E. Its most prominent feature is a temple pyramid dubbed El Castillo (“The Castle”). The top of the pyramid measures 130 feet, making it the second tallest structure in all of Belize. And that’s where we were on our tour—at the very peak, 13 stories up in the air—when my bad knee popped out of joint. I collapsed with a moan. Now I had much more than my fear of heights to contend with.

After composing myself, I made my way down the ruins, scooching on my bottom. When I finally reached the ground, I sank down in the grass under some trees and chugged water. I wondered how I would ever manage the mile hike back through the jungle to our rattly old school bus.

Roy and Ethel grasped my hands and hoisted me to my feet. I tested my swollen knee. It had been a chronic problem since a middle school injury. Within a few months, I would undergo surgery, hoping to repair it. But for now, it couldn’t bear weight.

Roy stood on one side of me, and Ethel on the other. They were both gray-haired retirees with slim builds. “Put your arms around our necks,” they told me. “We’ll be fine.” The rest of our group had disappeared, headed back to the bus.

The ordeal that followed was hot, muggy, buggy, painful, and torturously slow. But somewhere in that stretch of jungle, the three of us stopped being acquaintances and became friends. We bonded for life. In later years, whenever we looked back upon our decades of steadfast relationship, we all pointed to Xunantunich as the beginning. We didn’t realize on that day what was happening, of course. In fact, in my journal entry, I devoted only three quick lines to the drama surrounding my knee.

Now, almost four decades after Belize, Roy and Ethel are both gone (though they still live in me). The suitcase of my life remains stuffed with questions. I don’t even bother wrestling with it anymore, trying to zip it closed.

This matter of “helping and being helped” takes up a ton of room in my bag. It also takes up a ton of room these days in our nation’s collective baggage. It isn’t always easy to know how to help one another through this crisis, is it? Sometimes, frankly, we’d rather abandon the scene and go sit on the tour bus, leaving the hard stuff behind. We forget that the bus won’t be going anywhere until we’re all on board.

Other times we struggle to hold up those who are hurting. “Put your arms around our necks,” we tell them. “We’ll be fine.”

We take a deep breath, and we ask for a little help. A lot, even. There’s no shame in it. Helping one another is a big part of what creates and maintains community. Helping helps make us Us.

Besides, asking for help—like offering it—can lead to great and unexpected things … most especially, perhaps, to friendship, the kind we can always count on to hold us up when we can’t walk on our own.