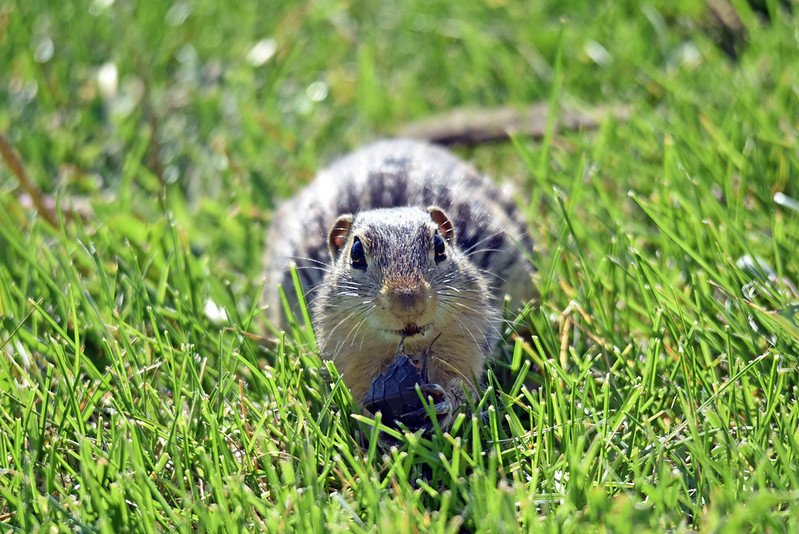 What Shape Is Your Nest in?

This cute critter got me thinking about nesting. She’s a thirteen-lined ground squirrel. Her burrow lay beneath the campsite that my family occupied for several days this past week. The main entrance to the burrow was a small hole, two inches in diameter, right in front of our parked car.

Mornings and nights, we never saw the squirrel. But throughout the sunny afternoons, she skittered around, gathering grass and dried leaves to spruce up her underground digs. Her head would pop up from her hole. After scouting for predators, she’d leap out and dash away. Soon she’d return, her mouth so full of nesting material that, even scratching and pushing with her hind legs, she could barely squeeze back into the burrow.

“How much nesting stuff does one squirrel need?” I wondered. “Does an entire town of squirrels live down there?” (The answer, I learned, was no. This type of ground squirrel is a solitary creature.)

“Maybe she’s preparing for some little ones,” I thought. (Nope. I learned that her mating and birthing season was well past—if, in fact, the squirrel was a “she.” You can’t tell a female from a male by their markings.)

“Maybe she’s getting ready to hibernate,” I thought. (Wrong again. She won’t hole up for winter until late September or early October.)

As you can tell, I’m no expert on ground squirrels (or “striped gophers,” as they’re sometimes called). But our half-pint friend seemed intent on all this trouble, several hours every day, scampering around, yanking up grass and collecting husks and leaves, for no other reason than to make herself more comfortable. That’s right: to take care of herself.

Guess what else? Though I listened closely, I never once heard this squirrel accounting for why she was cushifying her digs instead of storing up seeds and other necessities. Nor did I ever hear her apologizing for devoting so much attention to her own self-care. She simply knew it needed to be done, and she did it.

This leads me to ask: What’s the state of your nest? Might it benefit from some loving attention?

“Nesting” has been on my mind a lot these days. In less than three weeks, son Nathan will be a wet-behind-the-ears freshman moving into a college dorm. Like a family of squirrels, we’ve been stockpiling the goods he’ll require in his new home away from home.

Nathan doesn’t much care about transforming his dorm room into a welcoming, cozy space. “It just needs to be functional,” he told me, ever the practical soul.

So I asked him if I might help organize and style his room. “It would make me feel better about your leaving home.”

He took no persuading. I’m thrilled. It’s a bit like being pregnant again, preparing a safe, cheerful place for my baby.

While I’m helping with Nathan’s college nest, I’m also discussing with husband Jihong certain changes to our nest, a beloved but crotchety 130-year-old house. First, we want to rearrange and redecorate a few of the living spaces. These alterations won’t involve much money; muscles, mostly. Yet they will make these rooms more suitable for us as a couple. One day, we hope to downsize to a different dwelling altogether, one that will be friendlier as we advance in age.

Nathan has said yes to all this nesting, too. Even though he won’t be around much anymore, he still lives here. He’s part of us. We hoped for his blessing and weren’t disappointed.

No matter what kind of nest you or I might have, when we take care of it, we take care of ourselves at the same time. Nesting isn’t just a way to shelter and protect ourselves and those we love. It’s also an activity that helps us find our balance. It can help keep us sane, especially during challenging times in our lives.

I invite you to look at the place where you live (or work) with fresh eyes. How do you feel in this space? How might you feel more content in it? Would you like to try rearranging the furniture? What about changing the lighting, or the colors? What’s there that doesn’t have to be? What isn’t there that you wish for?

If you’ve gone through a recent transition (or are about to), please consider the possibility of reflecting that reality in your home environment. Maybe your children don’t need you as they used to. Maybe you lost your job or are in financial distress. Maybe someone dear to you has died. Maybe you yourself are exhibiting signs of illness or age. Maybe life is hard right now, for no reason you can pinpoint.

Reimagining your old nest might open and soothe your spirit. And bringing that creative vision for your nest into being might remind you of your own worth and power. You don’t have to settle for what is. You can comfy it up. For your own sake.